With the exception of very small diameter pipes, such as 1- to 1½-inch HDPE innerduct for utility cables, most mini-HDD operations require the expansion of the initial pilot bore hole. The increased size is necessary to accommodate the relatively large diameter of the pipe, including pulling grips, as well as to facilitate spoils removal and avoid unnecessarily large pullback forces on the pipe. A final hole diameter at least 50% greater than the outer diameter of the pipe (or pipe bundle) is recommended, with a maximum clearance of 12-inches for pipes or bundles greater than 24-inch diameter. The back-reaming and pullback operation typically requires greater time, machine load, and drilling fluid volume than the initial pilot bore due to the creation of the larger hole. The soil conditions will determine the appropriate type of reamer. 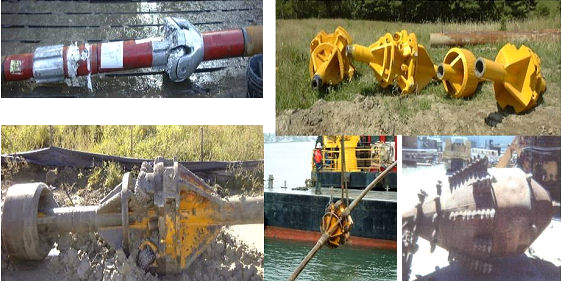 In some cases, the back-reaming operation requires more than the two stages. A simultaneous back-reaming/pullback operation is adequate for product pipes up to approximately 4-inch nominal size. For larger sizes, however, a pre-reaming operation(s) is recommended, allowing relatively large holes to be created in stages. Although time-consuming, this procedure reduces the required torque and thrust loads at the HDD equipment, and reduces the likelihood of subsurface voids, surface heaving or settlement, and undesirable drilling fluid appearance at the surface. In order to maintain the original path during the pre-reaming operation, drill rods must be available at the pilot bore exit and connected to a swivel at the rear of the reamer and pulled into the hole. Prior to pullback, a final reaming pass may be accomplished using the same sized reamer as will be used when the pipe is pulled back (swab pass). The swab pass cleans the borehole, removes remaining fine gravels or clay clumps and can compact the borehole walls.